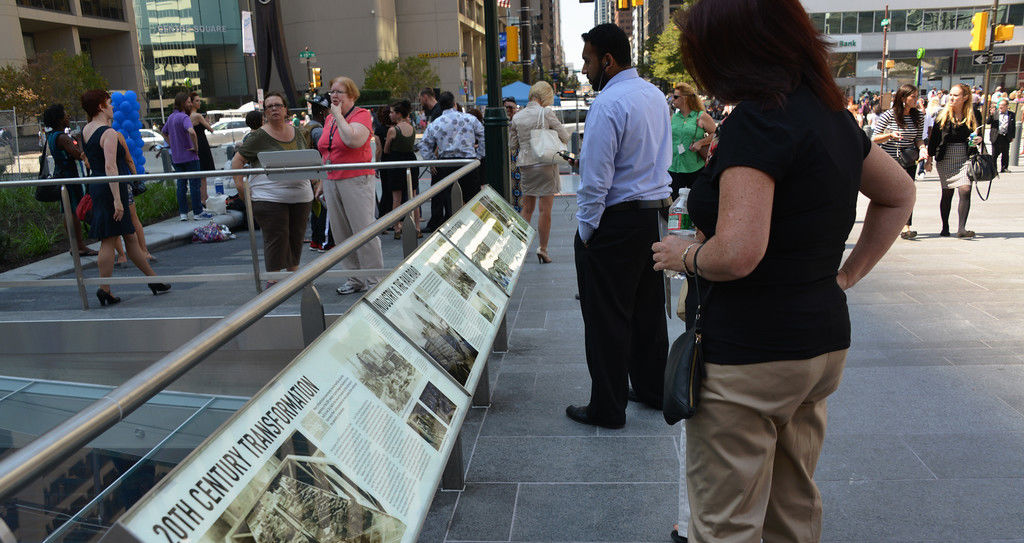 In Dilworth Park, visitors will find informational panels, videos, and graphics that tell the stories of William Penn’s original Center Square, the original waterworks on the site, the building of City Hall, the role of former Mayor Richardson Dilworth and his impact on others.

Six historical panels are displayed in glass cabinets with stainless steel frames and are backlit by LED lighting along the main Market Street walkway of the park. The six panels are titled: The Plan for Philadelphia, Centre Square Water Works, The Building of City Hall, Industry & the Railroad, 20th Century Transformation, and Center City Renewal.

Videos from Sam Katz’s History Making Productions will be in continuous play on two LED screens, positioned on the north and south sides of the south elevator headhouse.

Among the many stories the short videos will tell are: the Centre Square Waterworks; The Construction of City Hall; The Clark-Dilworth Era; Richardson Dilworth as Mayor; Breaking the Gentleman's Agreement/Liberty Place; Music on Every Corner, 1950s; Octavius Catto; Sound of Philly, Kenny Gamble; and others.

Quotes By and About Dilworth

Throughout the park, engraved in granite, are quotes both from or about former Mayor Richardson Dilworth.

"Yes, I am an emotional man and a fighter. Do you think there would be any cities if there were not men like me to fight for them? If elected, I’ll be the best damned mayor Philadelphia ever had.”
--Richardson Dilworth, 1955

"Some cynics say that our big cities should be eliminated, but you cannot have a lot of suburbs sprawled out in search of a city.”
--Richardson Dilworth, 1958

“Before Dilworth was district attorney, no black assistant district attorney went into major courts as a trial lawyer. One second after he took office, centuries of oppression were wiped away by a man who put justice over political advantage.”
--Judge A. Leon Higginbotham, Jr.

“When Dick was DA, we hated it when it was time to go home. He made you feel ten feet tall.”
--Samuel Dash

Many of the historical images used in the site graphics are also being enlarged and installed on the ground floor of the west side of City Hall where visitors to the site will have access to public restrooms.