Note: The start of the Ambassadors of Hope 2020 Spring/Summer/Fall joint outreach program has been delayed during this time of pandemic quarantine and shutdown.  As conditions permit, the CCD, Project Home and Philadelphia Police Department will resume this valuable and much needed service in the Central core of the City.

The Ambassadors of Hope Joint Outreach Program started on Monday, April 22, 2019 and is deployed Monday through Friday from 10 am to 6 pm.  Two (2) teams consisting of two (2) Project Home outreach workers, one (1) Philadelphia Police Office from the Central Service Detail, a CSR Homeless Outreach Team member along with a CSR manager with a vehicle monitoring both teams as they cover the entire footprint of the Center City District.  One team covers west of Broad St. while the other, the east side, with daily emphasis on addressing hot spots and engaging with well-known, chronically homeless individuals.

The thirty-five (35) week initiative concluded on Friday, December 13, 2019. Through frequent engagement by the trained joint outreach teams, numerous homeless clients accepted services and were transported to service providers geared towards their individual needs. A number of those accepting services were known chronic homeless individuals who have resisted service and placement in the past.  Those who did not accepted services, but who were observed in violation of the Sidewalk Behavior Ordinance, were instructed by the police officers on the team to cease the behavior and all complied with no citations or code violation notices having been issued.

After one hundred-sixty two (162) days (35 weeks), one hundred–eighty five (185) individuals have accepted services offered by the joint outreach teams and physically transported from the street to a site appropriate for their needs. Six (6) individuals received placement/treatment through the 302-commitment process (involuntary) for one hundred-ninety one (191) individuals receiving placements. The teams also contacted EMS for emergency service and transportation to area E.Rs for eleven (11) individuals they encountered who were in need of immediate medical treatment. The CCD provided transportation for 149 of the 191, or 78% of the individuals connected to services.

The average number of homeless individuals and panhandlers engaged by the team each day was seventy-five (75) and the average number of Sidewalk Behavior Ordinance compliances to police enforcement efforts was twenty-six (26). Twenty (20) encampment clean-ups have been completed based on referrals from the joint outreach team.

The members of the joint outreach teams meet frequently along with the administrators of the program and service providers to provide follow up for those who have received placement to help ensure they don’t return to the streets and to discuss strategies for reaching those on the street still refusing service as well as deployment locations/times and Service Days (encampment clean-ups).

During the cold weather months, the Ambassadors of Hope outreach effort will continue on a scaled-down basis, as the City increases its winter outreach.

Donate now to contribute to Ambassadors of Hope.

To expand the impact of Ambassdors of Hope, Project HOME and the Center City District unveiled a new information campaign on December 18, 2018, highlighting five Philadelphians previously living on the streets who chose a path out of homelessness and now seek to inspire others to do the same.

Fifty digital ads and 20 printed posters, pictured below, are appearing in transit shelters throughout Center City and feature photo portraits and success stories of five formerly homeless people – Alfonso, David, Katie, LaToya, and Nasir – speaking to others still living on the street: “Your Story Doesn’t End Here. I Know Because Mine Didn’t.” The posters also provide information about several Center City locations where those in need can get meals, services and access to housing.

“Today more than ever we need to continue the fight to end and prevent street homelessness in Philadelphia. Countless women and men have taken that first step that has led them home. We are redoubling our efforts to engage those who are living on the streets in Philly to end street homelessness,” Project HOME Executive Director Sister Mary Scullion said.

Additionally, counter postcards are available for display by retailers, restaurants, hotels, residential buildings and offices in Center City. These counter cards feature the same five individuals telling members of the public how they can best help and offer information cards that can be handed to people living on the street. The cards communicate where food, services and shelter can be found and provide information about how the public can direct their charitable donations to organizations that are making real change, helping individuals find a way home. You can download those information cards to the right for distribution to those in need on the street or to order counter cards, contact Joann Loviglio at jloviglio@centercityphila.org.

To expand this communications initiative, make a tax deductible contribution to the Center City District Foundation.

GIVING OPPORTUNITIES
To learn more about how you can support CCDF initiatives, please contact:
Katie Andrews
Director of Development
215.440.5529
kandrews@centercityphila.org 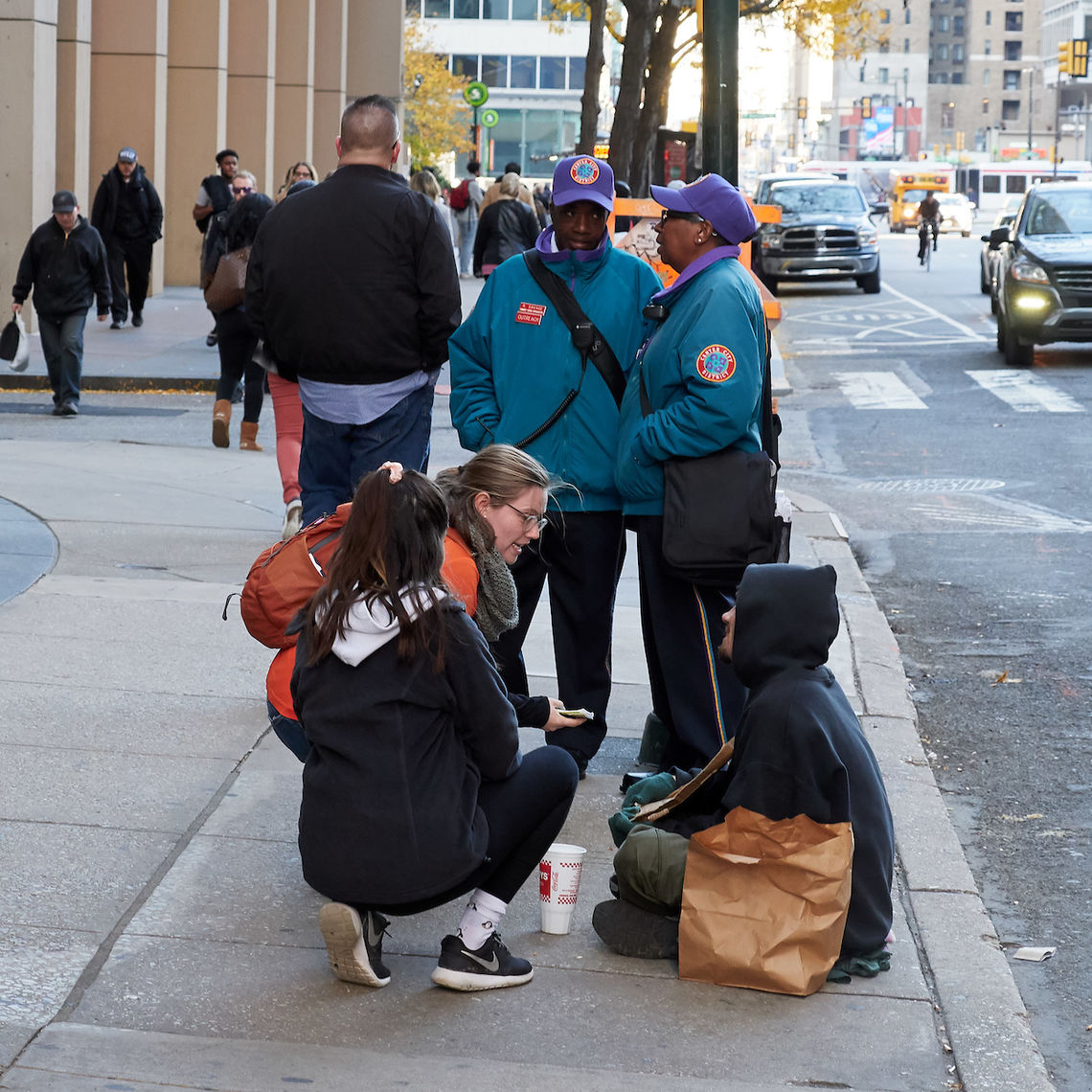