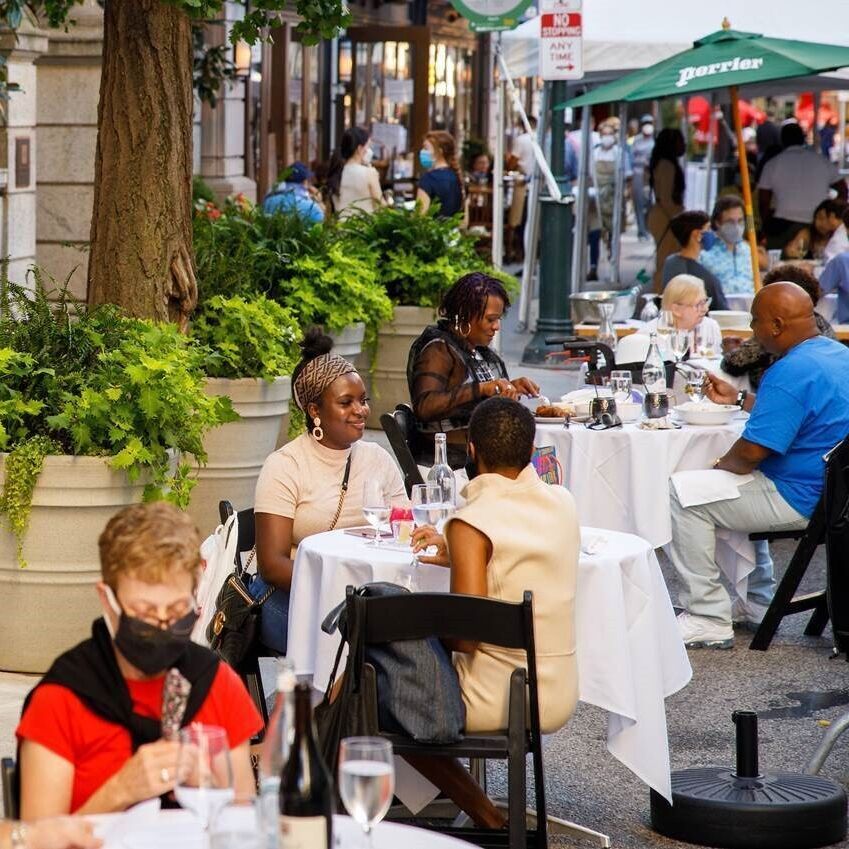 The steady, incremental lifting of pandemic-related restrictions has enabled retail, restaurant and service businesses gradually to reopen, drawing an increasing number of pedestrians back to Center City’s sidewalks and helping to restore thousands of jobs.

This new report from Center City District/Central Philadelphia Development Corporation, Restaurant and Retail Recovery: Slow, Steady, but Fragile, tracks the rebound over the last three months, based on detailed, on-street surveys of 1,884 downtown establishments conducted by CCD’s staff in both June and September, and on data from 20 digital pedestrian counters that CCD has installed throughout Center City.

The cumulative impact of the mandatory COVID-19 shutdown of workplaces in mid-March, curtailed public transit service, suspended conventions and tourism, and days of civil unrest and property damage had taken a severe toll by mid-June. CCD surveys undertaken at that time found only 54% of ground- and second-floor retail, restaurant and service businesses within the District were open. By late September, the number had increased to 79%. Most notably, the number of premises that were boarded up in the spring steadily declined from 276 in June to just 56 at the end of September. Between June and September, the number of fully or partially open restaurants increased from 352 to 460; among retailers, the number jumped from 340 to 440. This gradual reopening has returned vitality to sidewalks is helping to restore thousands of jobs in the service sector.

Data from digital pedestrian counters, installed at strategic locations within retail areas and along two blocks in the office district, show that pedestrian volumes have more than doubled since the week following the shutdown, and rose from an average of 54,855 per day in June to 90,813 at the end of September. Nonetheless, counts are still only at 42.4% of the volumes during the same week in 2019. Most tellingly, in the office district they are only at 22% of 2019 levels.

“Until a larger portion of the 127,000 office workers, who make up 40.6% of downtown employees, return to their desks, until a greater share of administrative and professional staff at hospitals, colleges and universities return downtown, until performing arts institutions reopen and our 13,000 hotel rooms begin to refill, Center City retail, restaurant and service establishments are going to be challenged,” Center City District President and CEO Paul R. Levy said. “But the data from this survey is very encouraging: we are moving in the right direction,” he added.

Despite some high-profile closures, often of national chains going through consolidation, retail has rebounded too, with 113 stores fully reopening within the District between June and September. The percent that are fully opened has climbed from 54% in June to 75% in September (from 281 to 394).

Service businesses, including banks, gyms, salons and laundry services, as well as some first and second floor offices for lawyers and doctors, have steadily reopened. Those fully or partially open increased from 329 in June (62%) to 419 in September (82%).

“Center City District has been working to attract customers to downtown shops and restaurants through social media, traditional advertising, email newsletters and a Restaurant Week promotion that all have underscored the importance of observing health safety guidelines. CCD also has partnered with Center City retail associations, merchants and the City of Philadelphia to secure approvals for weekend street closures that have expanded outdoor seating capacity,” Levy said. “But until the pandemic abates, most probably when a vaccine is widely available, until office workers, education and administrative health-care workers, hotel guests and college students return in large numbers, Center City's steady recovery remains fragile.”

As a supplement to CCD/CPDC’s October 5, 2020 report on the recovery of the restaurant and retail sectors within the Center City District above, this report provides additional data for the entire area from Vine Street to Pine Street between the Delaware and Schuylkill rivers.

The survey, which was conducted on foot by staff of the Center City District in the last two weeks of September, assessed both the type of business and whether it was fully or partially open. For restaurants, the survey also identified whether indoor or outdoor dining was available and the number of outdoor seats that were deployed.